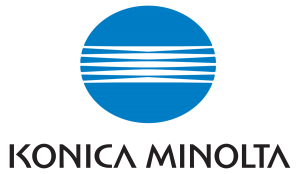 Konica Minolta is a Japanese technology company with offices in 35 countries worldwide. The company manufactures business and industrial imaging products, including copiers, laser printers, multi-functional peripherals (MFPs) – among a variety of other products, including Planetariums.

Konica Minolta was formed by a merger between Japanese imaging firms Konica and Minolta in 2003. Konica Minolta uses a “Globe Mark” logo that is similar to the logo of the former Minolta company as well as the same corporate slogan as Minolta  – “The Essentials of Imaging”.  In 2006 the company announced that it was quitting the camera and photo business. 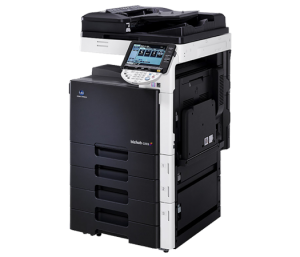 For some time after the merger between Konica and Minolta, both product lines continued to be sold, while research and development efforts were underway to create new products. The first Konica Minolta branded products were almost entirely “Konica” or “Minolta” products however, as they were the next generation products being produced by both companies before the merger. These products included multi-function copiers such as the Konica Minolta bizhub C350 (a “Minolta” design, also badged as the Konica 8022 and Minolta CF2203), and Konica Minolta 7235 (A “Konica” design).

Successive models included greater integration between the two sets of technologies, and current products such as the bizhub C451 contain many technologies from both histories. Some products such as the bizhub 501 are more noticeably an engine design from one company rather than the other – however the system itself, including operation and features are in the “new style” that holds little legacy from either former company. 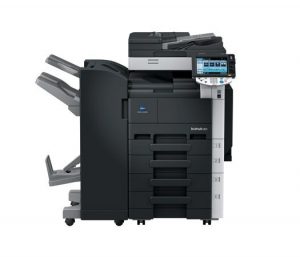 The current line of Konica Minolta office products has adopted a sleek contemporary style that has become something of a Konica Minolta trademark.   Company advertising boldly proclaims that Konica Minolta products are “stylishly designed for the human race.”  In addition to a style that enhances the décor of any modern office, the products are designed for ease of use for everyone.  The distinctive black and white body of their bizhub models convey a smart and clean look from every angle, allowing it to be placed almost anywhere, including the center of an office.

All Konica Minolta office devices and production print systems incorporate the principles of Universal Design so that they can easily and comfortably be used by anyone, regardless of age, gender, body size, or physical challenges. Their compact size allows easier placement in more locations in the office without being intrusive for better accessibility and ease of use. 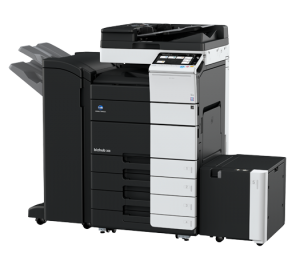 Konica Minolta’s flagship model is the bizhub – which they consider a networking gateway, not simply another copier. One of their control panel design breakthroughs consists of the central grouping of the sections that display information, and emphasizing them with white lines to symbolize and network, and providing excellent contrast against the black body.   Black is also the choice to improve the visibility of paper-handling areas, assisting users when setting documents in place, and to enable at-a-glance recognition of the output paper.

Another of the main features of the new bizhub is the flexibility of its control panel.  It tilts up and down as well from side-to-side. The control panel features blue LEDs, which are easily recognized by users with impaired color vision. To determine the most appropriate position for the side-to-side rotation of the control panel, Konica Minolta design engineers conducted simulations based on a statistical approach. This was done to ensure easy use by both tall and short people, as well as people in wheelchairs. They also conducted a number of simulations to determine the optimum size and shape of various parts; such as the heights and depths of paper trays, the shape of the handle on the automatic document feeder, the position of the paper cassette handle and the texture of the paper feed tray surface, among others.

Over the past several years, Konica Minolta has received numerous awards from the leading office products testing laboratories such as BLI, BERTLs Best Awards, Better Buys for Business, and Editors’ Choice Awards for breakthroughs in design, efficiency and energy conservation they have created for their line of office copiers.  It received the prestigious BLI “Line of the Year” award for is bizhub products, naming them the best business copiers in the business. The criteria to determine the annual “Line of the Year” include reliability, connectivity, output quality, control panel design, multifunctional capabilities, ease of use, productivity, administrative utilities and feedback to user workstations. The award is given to full ranges of copier-, fax-, or printer-based devices.

Konica Minolta stands apart from its competitors because of its efforts to get “inside the heads” of its customers.  Their promotional and marketing literature strongly reflects this commitment.  “Our goal is to know what you are thinking… to understand your needs from your perspective… to solve the challenges your business faces… by giving shape to ideas that contribute to a better future for all. “  Konica Minolta’s products, with their unique people-oriented and office compatible design appear to have followed the path its management and design team has laid out for it.