Canon photocopy equipment has been on the scene since 1965, although the company began in 1933 as a camera company under the name of Precision Optical Instruments Laboratory. Their first photocopier was the Canofax 1000 and their main competitor was Xerox. Canon released a plain paper photocopier in Japan in 1968.

While Canon’s technology was on a par with its best competitors, the company simply failed to distinguish their products successfully from the competition, allowing their rivals to catch up with them and advance beyond them.  After developing the “liquid dry” photocopying system in 1972, Canon decided to license the technology to other manufacturers instead of marketing it themselves.

Throughout the 70s Canon engineers made breakthroughs in the development of color photocopying materials and equipment, which were not, however, marketed until the 1990’s.  But in 1982, Canon released the first personal copier and marketed it effectively, along with other products, gaining unprecedented success in the integrated office workstation and desktop publishing explosion. One of their most successful ploys was the release of a laser printer similar to Xerox’s, but at one-third the price.

Through aggressive marketing, Canon emerged from the 1980s as an industry leader and doubled their profits in 1990. Despite its early marketing setbacks, Canon never let up its commitment to research and development of new products. Then, in 1987 when the industry was revolutionized through digital photocopying, Canon took on Ricoh by offering an integrated scanner and laser printer. Today, Canon’s office products division is its top revenue producer, led by its Digital Business Copiers.

Canon’s Runner Advance Series is their flagship photocopier and an example of their engineering innovations that inform the entire Canon product line. Simple to use, highly responsive, and easily personalized, the “imageRUNNER ADVANCE Series” partners with individuals and workgroups to create a truly customized way to work. 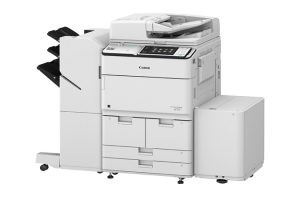 Ever forward-thinking, Canon raises the ability to communicate, connect, and collaborate to new levels. Cutting-edge document solutions turn the” imageRUNNER ADVANCE Series” into a center of productivity for a business. Seamless integration with enterprise applications, cloud-based services, and mobile devices empower success—anytime, anywhere. The Quick Menu can be used to power productivity via personal workflows, combining and accessing routine tasks and job flows at the touch of a button. Even change the number and size of buttons to your preference and preview stored documents before they are printed.

Canon’s next-generation “imageRUNNER ADVANCE Series” stays focused on the future. With effortless synergy between hardware and software solutions, these intelligent systems are the ideal choice to help achieve company goals as an organization evolves. And because they’re flexible, intuitive, and allow easy deployment of settings across an enterprise, targeted embedded applications can be added as needs change.

The universal design supports features that make these devices easily accessible to all. Thoughtful touches, such as a light under the automatic document feeder, reflect Canon’s consideration for the work styles and needs of all users. Customers will enjoy a consistent, simple-to-use experience, across every model in the Series with Canon’s distinctive interface and uniform print driver. 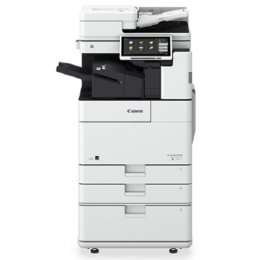 Another example of Canon’s current state-of-the-art copier models is the Canon imageCLASS® D1120 Black & White Laser Multifunction Copier. It provides robust copier features such as a large paper supply and multifunction capabilities in an easy-to-use, compact package. Users can print, copy, scan and network with this popular model. It is the base model within Canon’s D1100 series.

The 50-sheet Duplex Automatic Document Feeder (DADF) allows copying or color scanning  from one or two-sided originals and produce two-sided output with ease, cutting paper usage as much as half. The intelligent Energy Saver Mode reduces power consumption to approximately three watts of power and the product meets Energy Star guidelines, helping to save money on energy costs.

Incorporating user-friendly business tools with productivity enhancing features provides added flexibility. Designed for ease-of-use, the D1120 provides access to the control panel, toner, and paper supply from the front of the machine. There is no need to reach around to locate prints or to change the consumable. The smart paper handling of the D1120 enables fitting up to 1,050 sheets of paper (including the optional 500-sheet cassette) of all different sizes and types, up to legal size.

The D1120 also incorporates the Canon Single Cartridge System, which combines the toner and drum in one easy-to-replace unit, resulting in excellent image quality retention and eliminating the complication and warehousing of separate toner and drum consumables.

Canon, one of the earliest players in the Photocopy industry, maintains its rightful place high on the list of innovative providers of business solutions requiring quality photocopying equipment.